Unlike current surveillance techniques, which use ground-based radar, Automatic Dependent Surveillance - Broadcast (ADS-B) equipped aircraft broadcast their positions once per second using GPS technology. Data is transmitted to dedicated ground receivers as well as other ADS-B equipped aircraft via dedicated radio data links. Air traffic controllers and aircraft immediately see the information on their screens, which includes an aircraft’s identification, altitude, velocity and heading. Controllers, in return, can uplink weather and other data to aircraft.

ADS-B will undoubtedly be a critical component of tomorrow’s air traffic management infrastructure, but the full implementation of ADS-B will not be realized for many years. NEO by ERA decodes ADS-B signals according to all applicable standards (such as RTCA DO-260A and B) and can be configured as a standalone network of redundant ADS-B ground-stations capable of independent ASTERIX output. As an option, ERA can provide ADS-B receiver/ decoders in portable configurations and equipped with data logging facilities so that data can be downloaded to PC applications for analysis. This is of particular value for organizations undertaking ADS-B trials or site location studies. With ERA’s combination of ADS-B functionality and multilateration surveillance, next generation surveillance becomes deployable today. 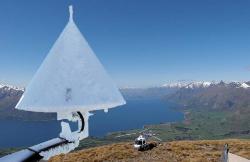